in the Night Sky

(and how to identify them)

"This morning, the ultimate dream of a planet watcher was come true: all of the planets condensed before me into one straightforward, nowhere peripheral view. It struck me like nine-branched lightning, held me still as a (deeply breathing) statue. All the planets at once."

The five brightest planets - Mercury, Venus, Mars, Jupiter and Saturn - have been known since ancient times and can easily be seen with the naked eye if one knows when and where to look. They are visible for much of the year, except for short periods of time when they are too close to the Sun to observe. All of the planets will not normally be visible on a single night, however.

The planets can be distinguished from the stars because their position changes slightly against the background stars from one night to the next, and their brightness varies in a regular cycle over a period of time. Stars are so distant that they appear as points of light in the night sky, and they appear to twinkle (or scintillate) because of turbulence in the Earth's atmosphere. Even in the largest Earthbound telescopes, a star appears as little more than a point of light. The naked eye planets, on the other hand, are close enough to the Earth to form a sizeable (but nonetheless tiny) disk in the night sky and consequently, when they are well above the horizon, the planets shine with a more steady light than the stars. Of the brighter planets, only Saturn and Mars are ever likely to be mistaken for ordinary stars - but only during their dimmer, more distant periods.

The stars generate their own light by internal nuclear fusion reactions, however the planets do not produce any light of their own; instead, they shine by reflecting a proportion of the sunlight they receive back out into space. The proportion of sunlight they reflect (known as the albedo) depends upon the planet's size, the amount of cloud cover it has and - where there is little or no cloud cover - the reflectivity of the features on its surface. The brightness of a planet to the naked eye depends upon a number of factors; its distance from the Sun, its apparent size (i.e. its angular size when seen from the Earth) and the relative positions of the planet and the Earth in their orbits.

The period of time during which any given planet (or any other celestial body) can be seen is known as an apparition. For Mercury and Venus, this is the period during which the planet is well seen in either the morning sky or the evening sky. For Mars and beyond, an apparition is measured from the time the planet becomes visible in the dawn sky (rising shortly before the Sun) to the time it disappears into the dusk sky (setting shortly after the Sun). The length of a planet's apparition depends upon its orbital period (i.e. the time it takes the planet to orbit the Sun) and its position in relation to the Sun and the Earth at any given time. Apparitions can last from just a few weeks (in the case of Mercury) to almost two years (for Mars) although a planet is normally seen at its best for only a part of this time.

Unlike galaxies and nebulae which are invariably faint, the naked-eye planets can easily be seen in light-polluted skies (i.e. where the night sky glows yellow-orange due to a multitude of poorly-directed lighting from streetlights and other illuminations).

The Naming of the Planets

The planets each have their own movement, brightness and colour characteristics. The ancient Greeks, around the sixth century BC, referred to them as 'planetes asteres' ('wandering stars') from which the word 'planet' is derived. They named each planet mainly according to its brightness and colour, the name given to them being mostly associated with heat and light. Hence Venus' brilliant white colouration earned it the name Phosphoros ("the light-bearing one") and Mars' orange-red colour was associated with fire, so it was given the name Pyroeis ("the fiery one") and so on.

In the fourth century BC, the Greek philosopher Aristotle converted these descriptive names into the names of Greek gods (and one goddess), each planet's attributes roughly matching those of its chosen god. The Romans later acquired these Greek names and translated them into their own equivalent gods, and these are the names that we still use today; hence the Greek goddess Aphrodite became the Roman goddess Venus and the Greek god Ares became the Roman god Mars, etc.

When another three planets were discovered in more recent times - namely Uranus, Neptune and Pluto, they were also given the names of Graeco-Roman gods, continuing the earlier tradition. Uranus is the only one of the major planets which retains the name of a Greek god (Ouranos) - this is because the Romans had no god which was equivalent to Uranus.

The names of the ancient Roman and Greek gods (and one goddess) which were associated with the planets are given in the Planet Appearance section below, together with a picture of each one (in the form of a statue, a statuette or a bust).

At a meeting of the International Astronomical Union (IAU) in Prague, Czech Republic in August 2006, astronomers decided that Pluto will no longer be officially classed as a 'planet' in the true sense; instead, it is now part of a new class of Solar System bodies known as dwarf planets, together with Ceres (the largest of the asteroids) and Eris (previously known as 2003 UB313 or 'Xena'). In 2008, Makemake (pronounced 'MAH-keh MAH-keh') and Haumea joined the growing list of dwarf planets. Consequently, there are now officially only eight true planets in our Solar System.

The Days of the Week

In the French language, the Moon and planets are also clearly evident in the days of the week: Lundi (Moon's day), Mardi (Mars' day), Mercredi (Mercury's day), Jeudi (Jupiter's day), Vendredi (Venus' day) and Samedi (Saturn's day). The month of March is also named after Mars.

The Current Positions of the Planets in the Night Sky

Detailed star charts showing the paths of the superior planets (i.e. from Mars to Pluto) and for the evening apparitions of Venus are given under each planet entry in the main section below (the path of Mercury is often included in the Venus evening charts).

The following links show the general positions of the planets in the form of small, all-sky views:

The Planets and the Zodiac Constellations

The Planets in Their Orbits

To see the current positions of the planets in their orbits (i.e. the view from above the Solar System), see Fourmilab Switzerland's 'Solar System Live' pages for the inner planets or the entire Solar System. A digital orrery (model of the Solar System) by Dr Thomas Morris appears on the BAA website. The orrery can be animated and/or adjusted by date.

The mathematical equations required to find the planets' positions are described in this article by David Colarusso. For those wishing to programme a computer with the formulae (using Pascal, BASIC, Fortran, C++, etc) Paul Schlyter provides a tutorial here and a detailed discussion here (includes the planets' orbital elements and the necessary formulae in an appropriate format for computer programming languages).

Visibility of the Planets in 2023

When are the Planets currently on view?

The following table provides an indication of the times of the day in which to view each of the planets in 2023 (Pluto is not included because it is solely a telescopic object). The table entries can be read horizontally by planet (to track the changing visibility of a particular planet during the year) or vertically by month (to determine the visibility status of all the planets in any single month). Visibility tables for the years 2008 to 2025 can be seen on the Visibility of the Planets page.

When two or more planets are listed as being visible at 'Dawn' or 'Dusk' in any particular month (e.g. if Mercury, Venus and Mars all appear listed under 'Dusk' in a single month) they are likely to appear close together in the sky during this time, and planetary conjunctions (when two planets are at the same celestial longitude) are most likely to take place. Planetary conjunction tables can be found on the following pages: Venus, Mars, Jupiter, Saturn, Uranus and Neptune. Because they mostly occur around dawn or dusk, conjunctions can often be difficult to observe, depending upon the observer's latitude and the local season. For this reason, the tables include an assessment of the likely visibility of each conjunction from both Northern and Southern hemispheres. 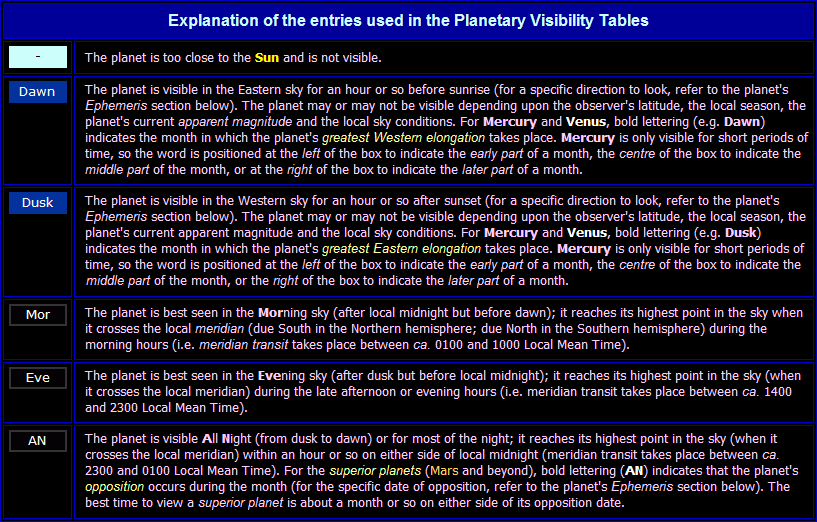 [Terms in yellow italics are explained in greater detail in an associated article describing the planetary movements in the night sky.]

The Appearance of the Planets in the Night Sky

The following images of the planets were taken by the writer using a video camera or a digital camera, and they give some indication of their naked eye appearance (or in some cases, their appearance with optical aid).

The planets are listed in approximate descending order of their average apparent magnitude (brightness) when seen from the Earth. The brightness values listed for Mercury, Venus, Mars and Jupiter are the brightest and dimmest magnitudes the planet can attain throughout its orbit (the brightest magnitude is listed first); those for Saturn, Uranus, Neptune and Pluto are the average brightness values for when the planet is closest to the Earth. It is worth pointing out that planetary magnitudes will often vary between sources (by up to ±0.2 magnitudes) depending upon the parameters used to calculate planetary brightnesses and/or whether the magnitudes have been rounded to a single decimal place.

Following each description is a simplified table of planet positions (known as an ephemeris) along with the dates of the planets' significant orbital configurations (oppositions, elongations and conjunctions) for the period from 2020 through to 2025 (inclusive). Planetary positions and configuration dates can be viewed back to 2005. An explanation of the abbreviations used in the tables can be seen here.

For the superior planets (i.e. from Mars to Pluto) star maps are included showing the positions of the planets to help in locating them in the night sky (maps are provided for both Northern and Southern hemisphere views). Click on a starmap thumbnail to see the full-size image and an accompanying description (these will open in a new window). With the exception of the Uranus, Neptune and Vesta finder charts, all of the full-size star maps have been produced at the same scale, indicated by a 10° scale bar. Note that the star maps include an element of distortion because of the cartographic projection; this is particularly the case where they cover large areas of the sky.

A brief discovery and/or observational history concludes each planet's entry.

Position your cursor over each planet image to see a photograph of the planet taken by NASA's Hubble Space Telescope (HST) or by other planetary spacecraft missions, with some additional 'pop-up text' information. An image of the relevant Roman god appears next to the planet's astrological symbol (mouseover) and, for the planets known since ancient times, an image of the Greek god appears just below the reference to the god's name (if Javascript is disabled in your browser, click on the image to load the picture in a new window).

Click on a planet to be taken directly to its entry:-

(All links will open in a new window)

Biographies of some famous early Astronomers

(All links will open in a new window)

Only two recordings are known to exist of Gustav Holst conducting his Planets Suite. The 1926 recording, performed by the London Symphony Orchestra, can be purchased from Amazon (US, UK, Canada) where samples can also be heard.