The Position of Neptune in the Night Sky:

From August 2006 to March 2010, Neptune was positioned in Capricornus, the Sea-Goat, where it had been situated since early 1998. In March 2010, Neptune briefly entered the constellation of Aquarius, the Water Carrier, spending about five months there before returning to Capricornus. In January 2011 it entered Aquarius once more, where it will remain until it moves into Pisces, the Fishes, in April 2022.

Neptune reaches opposition to the Sun (when it is closest to the Earth and brightest in the sky for the year) every 367˝ days on average, i.e. about 2˝ days later in each successive year. The apparent magnitude of the planet varies little during the period shown in the star chart: from +7.8 (at opposition) to +8.0 (at superior conjunction). Around all opposition dates shown on the star map, Neptune is due South at local midnight in the Northern hemisphere (due North at local midnight in the Southern hemisphere).

The apparent diameter of the planet (its angular size when seen from the Earth) at opposition throughout the period covered by the star chart is 2".4 (2.4 arcseconds, where 1 arcsecond = 1/3600th of a degree).

Neptune will cross the celestial equator in Pisces in April 2026 (heading North-eastwards and moving direct), in August 2026 (moving retrograde and temporarily heading South-westwards) and again in January 2027 (resuming North-easterly motion, moving direct). For the first time in over 81 years, the planet will then become visible for a longer period of time in the Northern hemisphere than in the Southern hemisphere (it last crossed the celestial equator - as it headed Southwards along the ecliptic - in Virgo in 1944).

Looking further ahead, the pale-blue ice giant will continue its Northward motion along the ecliptic until it reaches its most Northerly point in Gemini in 2067, having crossed its perihelion point (i.e. its closest point to the Sun) at 29.81 Astronomical Units (4.46 thousand million kms or 2.8 thousand million miles) in Aries in 2046.

[Terms in yellow italics are explained in greater detail in an associated article describing planetary movements in the night sky.]

Viewed from the orbiting Earth, whenever two planets appear to pass each other in the night sky (a line-of-sight effect) the event is known as a planetary conjunction or appulse. Not all planetary conjunctions will be visible from the Earth, however, because many of them take place too close to the Sun. Furthermore, not all of them will be seen from across the world; the observers' latitude will affect the altitude (angle above the horizon) at which the two planets are seen at the time of the event and the local season will affect the sky brightness at that particular time. A flat, unobstructed horizon will normally be required to observe most of them.

The majority of conjunctions involving Neptune are not spectacular to view because the planet is never visible to the naked-eye. Twilight quickly renders the planet unobservable (even through binoculars) such that conjunctions taking place less than about 22° from the Sun are almost impossible to see. When one considers that Venus is always less than 47° from the Sun, whilst Mercury is always less than about 27° from the Sun, it follows that, whenever either of these planets are involved in conjunctions with Neptune, twilight will usually be a problem, the lighter sky diminishing the visual impact of the conjunction.

Because Mercury is only ever seen in twilight, the number of occasions during which it can be seen in conjunction with Neptune is inevitably limited. During the period from 2010 to 2050, there are only ten occasions when Mercury is positioned more than 22° from the Sun at the moment of its conjunction with Neptune. One such occasion takes place on April 2nd 2019, when the planets are positioned 25° West of the Sun. This conjunction is visible from Equatorial and Southern hemisphere latitudes, low down in the Eastern sky before sunrise. However, the planets' low altitude (mostly less than 10° when Neptune is still visible) is likely to prove a problem for many observers. After 2019, another opportunity to see the two planets together will be on April 3rd 2020, when they are again 25° West of the Sun; this will likewise favour Equatorial and Southern hemisphere observers. In fact, the relationship of Mercury's eccentric orbit to that of the Earth's is such that the planet's most favourable elongations are best seen from the Southern hemisphere. Hence for the most part, Northern hemisphere observers are denied the opportunity of seeing the Sun's closest and furthest planets together in the sky.

Binoculars will always be required to glimpse Neptune as a pale-blue 'star'. Even when the elongation is favourable, a further problem beckons in that the glare caused by the brighter nearby planet (Venus in particular) makes it difficult to see the much fainter planet beside it. In such instances (e.g. for the Venus-Neptune conjunction of January 13th 2017) binocular observers may find it easier to position Venus just outside the binocular field of view so that Neptune may be more comfortably viewed.

Most conjunctions between Neptune and the other superior planets (Mars, Jupiter, Saturn and Uranus) occur at elongations of less than 90°, when Neptune is below its brightest magnitude in any given apparition. During the nine-year period from 2011 to 2020, for example, only one visible conjunction takes place at an elongation greater than 90° (with Mars in June 2020), Neptune being almost magnitude +8 at every conjunction.

Neptune's most interesting conjunctions take place when the planet is within a few months of opposition, at which times they involve the much brighter planets Mars, Jupiter or Saturn; these events are rare, however. The most recent conjunction of note was between Neptune and Jupiter on December 20th 2009, when Jupiter described its significantly larger planetary 'loop' about one apparent Full Moon-diameter to the South of the outermost gas giant. It was the last of three conjunctions which took place between these planets during that year (more details can be found here). Neptune's next favourable conjunctions with superior planets will be with Mars in January 2017, with Jupiter in April 2022 and with Saturn in June 2025.

In terms of their sizes, their positions within the Solar System and their constituent elements, Uranus and Neptune are often considered to be planetary 'twins'. From the viewpoint of the Earth, faster-moving Uranus 'overtook' Neptune when the two planets were in Sagittarius in July 1993, at which point they were seen in conjunction. This was the first time these planets had been in conjunction since they were discovered (Uranus in 1781, Neptune in 1846). Conjunctions between Uranus and Neptune are rare events indeed, occurring about every 172 years; the next one will be in the year 2164.

The following table lists the conjunctions involving Neptune which take place between 2011 and 2020 at solar elongations of greater than 20°. In several cases, other planets and/or stars are also in the vicinity and these are detailed. Note that, because some of the conjunctions occur in twilight, the planets involved may not appear as bright as their listed magnitude suggests.

Although any given conjunction takes place at a particular instant in time, it is worth pointing out that, because of the planets' relatively slow daily motions, such events are interesting to observe for several days both before and after the actual conjunction date.

There are in fact two methods of defining a planetary conjunction date: one is measured in Right Ascension (i.e. perpendicular to the celestial equator) and the other is measured along the ecliptic, which is inclined at 23˝° to the Earth's equatorial plane (this is due to the tilt of the Earth's axis in space). An animation showing how conjunction dates are determined by each method can be found on the Jupiter-Uranus 2010-11 triple conjunction page. Although conjunction dates measured along the ecliptic are technically more accurate (separations between planets can be significantly closer) the Right Ascension method is the more commonly used, and it is the one which is adopted here.

During 2020, Neptune can be found in the North-eastern region of Aquarius, the Water Carrier, close to its boundary with Pisces, the Fishes. Throughout the year the planet is positioned in the vicinity of the star

Aqr (Phi Aquarii, mag. +4.2); to its South-west from January through to mid-February and to its North-east for the remainder of the year. 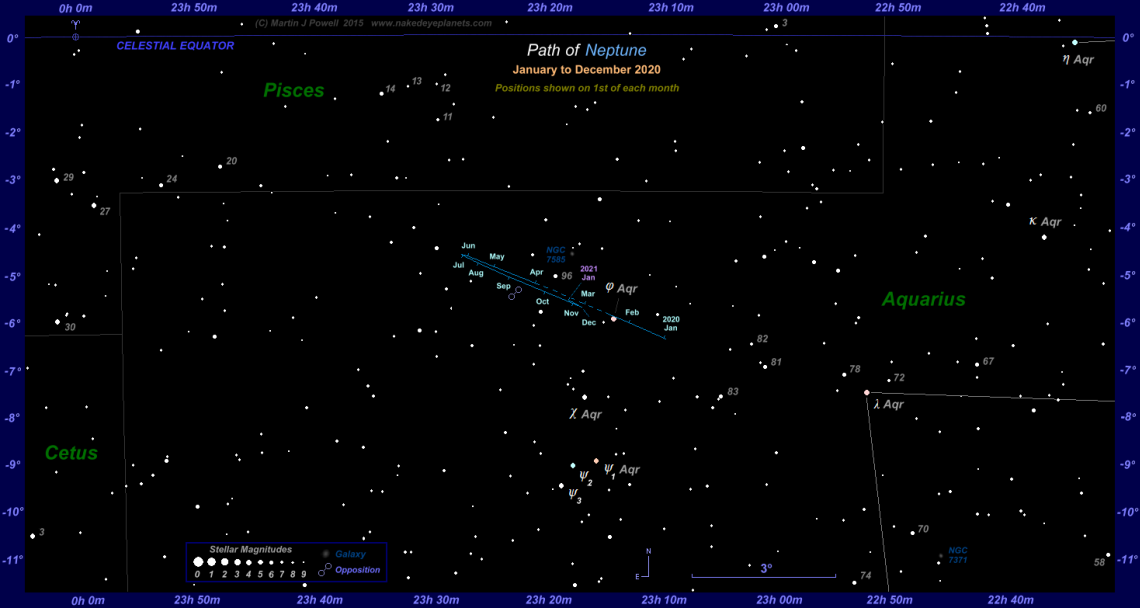