Current Positions of the Planets in the Night Sky:

Positions of the Planets at Totality

On August 21st 2017 millions of observers looked skywards to witness the first total solar eclipse over the USA mainland since 1979. The 'Great American Eclipse', visible from twelve states across the country from North-west to South-east, was the most photographed, filmed and talked-about solar eclipse in history. This article does not examine the eclipse itself, however, but the naked-eye planets which one could have expected to glimpse in the vicinity of the eclipsed Sun (and a little further afield) within the 2˝ minutes or so of totality. A total solar eclipse is the only circumstance in which planets positioned on either side of the Sun (morning and evening planets) can be observed from Earth at the same time.

What Planets were Visible During the Eclipse?

There were potentially four naked-eye planets which were viewable during totality, two with ease and two with some difficulty. The two brightest would have been visible long before totality arrived:

Venus, at an apparent magnitude of -4.0 was easily seen against the twilit sky caused by the eclipse totality. In fact, it should have become visible some 15 minutes or more before totality, when the eclipse was still partial and the sky was slowly darkening. Venus was positioned 34° West of the Sun at the time of the eclipse and was about half-way through its 2017 morning apparition, having been visible as a 'Morning Star' before dawn for several months. The planet was positioned in the Eastern half of the constellation of Gemini, the Twins. Its two brightest stars Castor (

Gem or Beta Geminorum, mag. +1.1) were positioned a short distance above (North of) the planet, both of which should have been visible in the twilight of eclipse totality.

Jupiter (magnitude -1.6) was positioned 52° to the East of the Sun at eclipse totality. It should also have become visible during the partial phase of the eclipse. For observers along the track of totality who were located West of central Idaho, Jupiter could not be seen because the eclipse took place before the planet had risen (see table below). Jupiter was positioned in central Virgo, the Virgin, near its brightest star Spica (

Vir or Alpha Virginis, mag. +1.0) which should also have been glimpsed in the twilight of totality. Jupiter was an evening planet, visible after sunset, around 90% through its 2016-17 apparition.

Mars (mag. +1.8) was positioned just 8° to the West of the Sun. Mars was very distant from the Earth at this time and consequently it would have been more difficult than normal to spot in the twilight. Being considerably fainter than both Venus and Jupiter, it was only likely to become visible in the final seconds leading up to totality. The Red Planet, which appears pale orange to the naked-eye whenever it is bright, was positioned in Western Leo and would soon emerge out of the dawn twilight into the start of its 2017-19 apparition (in July 2018 Mars will reach its closest point to the Earth in almost fifteen years).

Mercury (mag. +3.4) was positioned 11° to the South-east of the Sun at the time of the eclipse. It was the faintest of the four planets visible during the eclipse and would have been the most difficult to detect. Mercury was at the end of its second evening apparition of 2017 and was the closest of the planets to Earth at this time.

At the time of the eclipse, the Sun was positioned in the Western half of the constellation of Leo, the Lion, not far from its brightest star, Regulus (

Leo or Alpha Leonis, mag. +1.4). Regulus itself may have been easy or difficult to discern, depending upon the brightness of the eclipsed sky and any glare effect caused by the Sun's corona. The brightness of an eclipsed sky is dependant on several factors and is difficult to determine in advance, so the magnitude of the faintest stars to be seen at totality is uncertain. Historically, eclipse observers have often seen stars with the naked-eye down to about magnitude +3.5, although photographic equipment will often detect stars of much fainter magnitude.

Direction & Altitude of the Sun and Planets during the Eclipse

The positions of stars and planets in relation to the Sun at total eclipse depended upon where along the track of totality the observer was located. The table below shows the direction and altitude (angle above the horizon) of the eclipsed Sun and the four naked-eye planets for thirty locations across the USA. Direction is given using conventional compass points; altitude is measured as 0° at the level horizon and 90° directly above the observer's head (a point known in astronomy as the zenith). Hence an altitude of 45° is positioned 'halfway up the sky' (see diagram below right).

The eclipsed Sun was seen at higher altitudes above the horizon in the Eastern half of the USA than the Western half, the highest altitude being in South-western Kentucky at a little over 64°. East of Tennessee the Sun's altitude at totality reduced, but only by a few degrees. In Oregon the eclipse took place at mid-morning, positioning the Sun in the ESE at around 40° above the horizon. At Columbia, Missouri - approximately halfway along the track of totality - the Sun was on the meridian (due South) at eclipse totality, at 63° high. In South Carolina the eclipse took place around mid-afternoon, placing the Sun in the South-west at a little over 60° above the horizon.

Difficult-to-see Mercury was to the lower left of the Sun from all states except Oregon, where the planet was positioned almost directly below it. From South Carolina Mercury appeared to the left of the Sun but only slightly lower than it.

The table below shows that, in a few states, pairs of planets had the same altitude in the sky at totality (i.e. they appeared level with each other, in relation to the horizon). In central Nebraska, Venus and Mars appeared almost level with each other, differing in altitude by 1° and being 26° apart horizontally. In central Missouri, Venus and Mercury appeared level, having the same altitude and being 43° apart. In central South Carolina, Venus and Jupiter appeared level, being 85° apart (almost one-quarter of the angular distance around the horizon). Finally, in central and Eastern South Carolina Mars and Mercury appeared almost level (within 1° in altitude of each other), being separated horizontally by an angular distance of 18°. 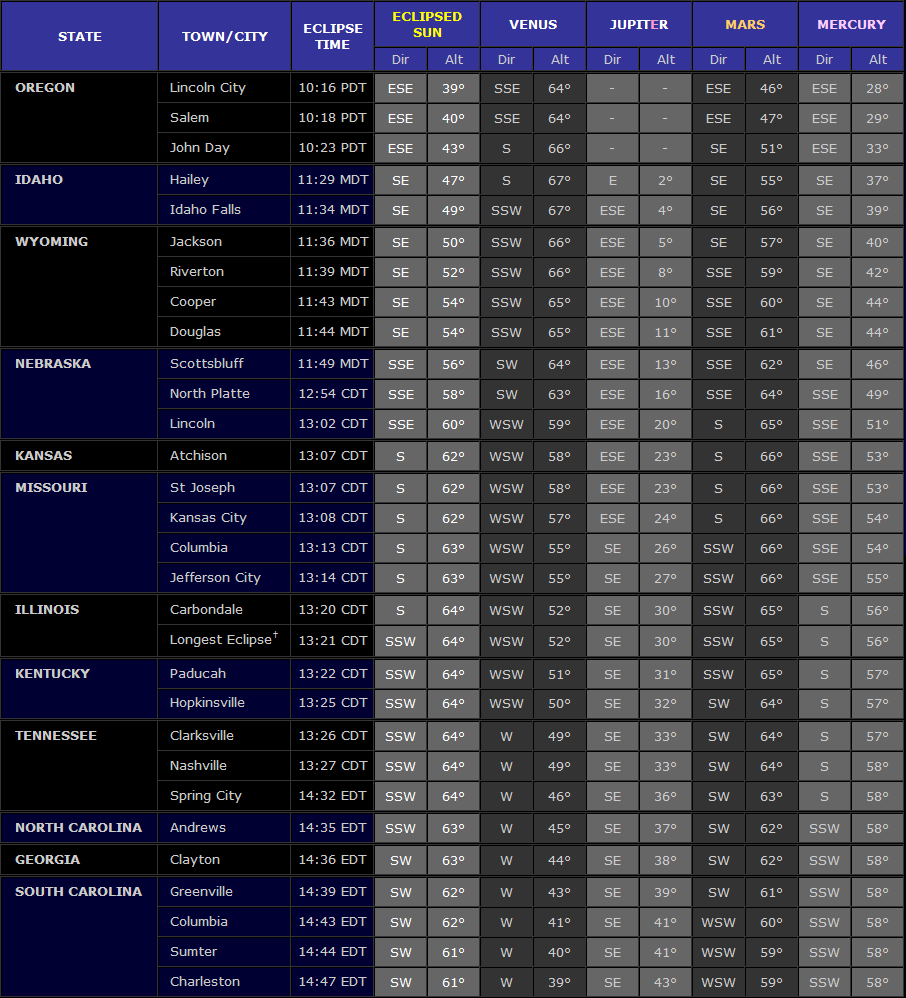 Although the excitement and the short duration of a total solar eclipse mean that most observers spend little or no time searching for planets, the spectacle of witnessing the Sun and its family of planets in Earth's daytime sky is a rare and special experience. The next opportunity to witness a total solar eclipse over the USA mainland will be on April 8th 2024, when all five naked-eye planets will be visible at totality! The path of totality on this occasion will cross through central Mexico, Texas, Oklahoma, Arkansas, Missouri, Illinois, Indiana, Ohio and Eastern Canada.